Lanyu, Taiwan, was one of the 52 top tourist destinations of the world as featured by the magazine “New York Times” in 2014, including a mention as a world-class diving paradise.

The tourist season is from the end of March to the middle of October, including the sea turtle spawning season between June and September when turtles go ashore for laying their eggs and the hatchlings return to sea.
Most tourists are from Taiwan or China
The most beautiful natural sceneries of Lanyu Island, or Orchid Island, are the mountains and the sea. Experiencing Lanyu’s traditional culture is also very popular. As Lanyu is not a sheltered island, it is often extremely affected by tropical typhoons every year.

Six daily return shifts are flown to Lanyu from Taiwan, 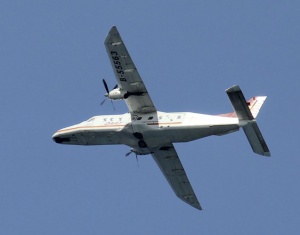 each flight accommodating only 17 people. The ferry can take about 250 passengers, normally running four return shifts a day. If the weather is not good the ferries may stop working. Riding

Lanyu’s petrol station near the port
scooters is the main transportation on this island. Foreigners can use an international driving license when renting cars. There is only one petrol station and along the 42 km of island roads there are no traffic lights. People should be careful when driving and riding scooters.

At times there might be more scooters than people on Lanyu…

Traditional style bungalow, by half in the soil
The island has a large number of B&Bs as well as many backpacker hostels.

There are many restaurants available but only one 7-11 shop on the island.
Yami men still go to sea to catch flying fish, women will go to the interior of the island in search of the sweet potato. Nowadays, despite the impact of foreign culture, the island still retains its traditional culture.

Side effects of tourism

The island today is dominated by tourism (accommodation, catering, scuba diving, guided tours). While young people are more likely to be educated on Taiwan Island, many remain on Lanyu Island to maintain local culture.
The most important topic has become „How to preserve the traditional culture“. We outsiders come to Lanyu Island for its beauty and should not burden Orchid Island with our presence. Because tourists produce too much garbage, which this island can’t afford, we ask tourists to politely take away their own rubbish.

The future of Orchid Island is in sightseeing

life is about sightseeing, and the employment plan is sightseeing, so sightseeing is of the highest concern on Lanyu Island. But what is the tourism policy of Lanyu Island? The future development of Lanyu Island is not planned in a specific district plan, and it is difficult to combine the issues concerning the land, its development as well as its culture when finding solutions to problems that concern all three aspects. Only time will tell what direction this island will take.

The big event of Lanyu Marathon

Lanyu Marathon in Mai 2016
The annual Lanyu marathon started in 2013 and has developed to an international event. During this weekend in Mai all accommodations are booked out or cost at least double the price.

2 thoughts on “Life on Lanyu today”