Do you have time for hiking, cycling or a boat trip? Or do you prefer the easy and fast way of doing a tour by scooter around the island (36 km)? Just have a look and enjoy some photos of beautiful sight-seeing locations!

Overview map of the Orchid Island ⋆ Ponso no Tao

This natural harbor is the biggest bay of Orchid Island in front of Dongqing Village. During the flying fish season, the decorated version of the traditional boats will be on the beach, like a beautiful painting. The sunrise here is very famous.

The cave is a natural rock door eroded by the sea, the sunset outside the sea cave shining inside can reflect the shape of love.

Traditional houses are half underground with a perfect underground drainage design to avoid typhoons. These northeast monsoon housing forms reflect the Tao people and the natural integration of culture. There are still some elderly people living in the traditional type house who still follow the ancient beliefs and live a traditional way of life.

The rock is shaped like a soldier’s helmet above the gap.

The topography of the rock, a relic of a volcanic eruption, looks like an elephant on the coast with a long nose.

The rock rises out of the sea like a column. Looking from the sea onto the rock, the trees on the top of the rock look like elderly hair, and facial features can be imagined.

It is an uplifted coral reef, the shape resembles a dragon head, with a mouth, feet, and beard. It is the representative landscape of a rich fishing ground.

Located about 3 miles southeast of the main island, it is a very important fishing ground for the Tao people. Legend has it that if woman disregards the taboo of going to Little Lanyu, it will provoke a storm or the risk of climate change. This place is quite rich in fish during the fish season; Tao people often go to catch flying fish here. Nowadays it is uninhabited. The military took it over as a missile test range, and the island has a lot of munition shells and unexploded bombs.

Along the road across the island we can reach the weather station. In World War II the Japanese mobilized local residents to build it in 1940. The wall still shows many traces of gun holes from the war. Here is the best view of Orchid Island.

Datienchih is a crater lake. Along the mountain road of Datienchih , you can see that Tao people left family marks on the trees, and each family mark is different. It signifies the family ownership of trees, which belong to the forest resources of the Tao with their the special management system.

Xiaotienchih is also a crater lake, the traditional forbidden lake. Usually, Tao people go into here before wiping their body with ”Silver-grass” in order to eliminate evil.

Mantou means steamed bread in Mandarin. It is described as a big steamed bread from a distance. Mantou Rock is now an Orchid senior high school campus; the beautiful building and the surrounding environment embrace each other.

All kinds of vessels, cargo ships and fishing vessels access this harbor. Overlooking Kaiyuan Harbor to the north is the Red Head Rock, to the south is the old Kaiyuan Harbor with a former white lighthouse, which looks quite nostalgic with the ladder built along the rock.

It is described as a red head when the sun sets. From Taiwan, looking over to Orchid Island you expect to see the red edge of the red rock, as if it was lying on the sea’s red head. Hongtou means red head in Mandarin, so Lanyu was also called Hongtou Island in the early years.

Crocodile rock consists of pyroclastic accumulation. Because of the erosion effect it looks like a crocodile’s rough skin, and like a crocodile raising his mouth to the sky. So it is named Crocodile Rock. Sheep grazed by local residents are often naughty, climbing and standing on the big mouth, looking like a picture of a crocodile swallowing sheep.

Five-Hole Cave is a series of sea caves. The traces of coastal rocks and the coral fossils can be seen clearly on the rock wall. Five holes are formed in close proximity to each other, and each locality is given a different name. In the past, it was a place where Tao people gathered together. The first hole is the “snake nest”, the second hole is a place to rest, the third hole is the “Sumo hole”, the fifth hole named after the millet pestle. This is also known as “the nest of evil spirits”. Young women and children should not stay too long in this forbidden zone.

Also known as Couple Rock, it is named by its shape. It is unique and full of imagination. Legend has it that in Beauty Rock was a girl child. She persuaded her parents not to quarrel, which did not work out, and finally she stood on the road and became a rock.

It resembles two traditional Chinese auspicious lions, like a loving lion couple close to each other. They can be identified as male and female.

Here is the traditional fishing ground of Dongqing Village. As the rocky island looks like a group of warships, according to legend, during World War II in the Battle of Orchid Island between the United States and Japan, a US military aircraft mistakenly believed that the rock was a warship and shelled it.

Another map of Lanyu’s Attractions 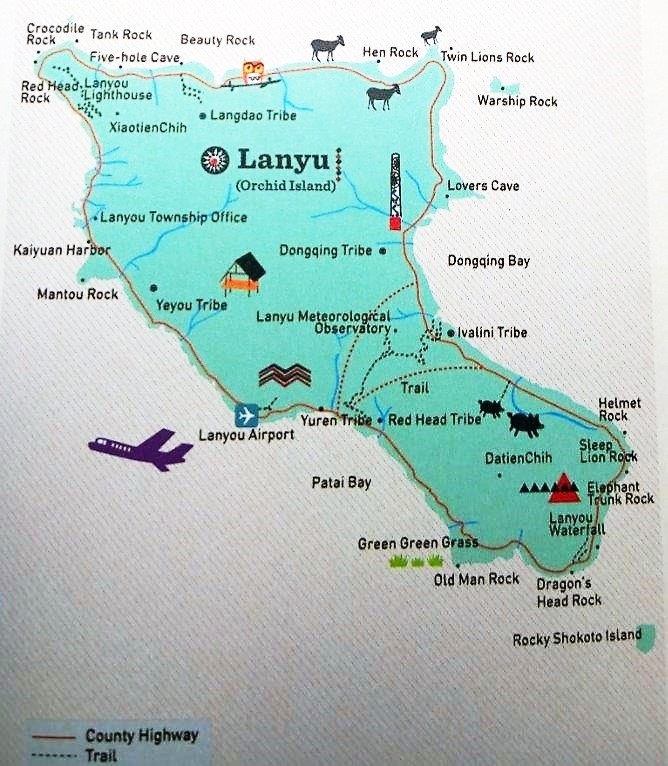